IS YOURS  DAMAGED AND DO YOU HAVE ENOUGH?

I’m a home inspector, WIN Home Inspection of Salem Oregon. Part of my job is to inspect the attic area of homes for possible issues: roof leaks, electrical dangers, proper venting, ducting, chimney leaks, animals, mold, insulation, anything that may negatively affect the home or the people living in the home. Over the last fifteen years I have seen it all.

A couple of years ago I inspected a nearly new home for a lady. Three months later I got a call from her telling me that her master bedroom was cold, much cooler than the rest of the home. We scheduled a time for me to go over the see if I could figure out why. When I got there I could clearly feel what she meant, the room was much cooler than the rest of the home. I checked the airflow from the heat duct and it was good and after checking windows and doors I found no visual reason for the cooler temperature. Fortunately I have an infrared camera that I use to inspect homes, so I got it out of the toolbox and fired it up. As I scanned the walls and ceiling I discovered a large area of the ceiling that was showing a cooler surface than the rest of the ceiling. This was a little disturbing because when I inspected the attic during her full home inspection the insulation in the attic was perfect.

I asked her if anyone had been in the attic since I had inspected the home. At first she told me that no one had, but when I showered her through the camera the cooler area, she then remembered that the cable guy had been up there to install a cable for her wall mounted TV.

When I went up into the attic to investigate I found an area, about one hundred square feet, where the insulation had been disturbed. There was even a small area where I could see the top of the ceiling’s sheet rock. The cable guy had moved insulation to try and find the top of the wall so he could drill a hole to run the cable for the wall mounted TV.

Some time ago I was inspecting a home where the seller was at the inspection. As I got ready to go into the attic, the seller told me proudly that they had two years earlier, spent a lot of money to have the attic completely re-insulated to a R-38, about sixteen inches of blown-in insulation. Unfortunately, since that time they had a home security system installed, the phone company had added phone lines into two of the bedrooms from the attic and the cable company had added cable to all of the bedrooms from the attic. The new insulation in all areas of the attic was completely destroyed. 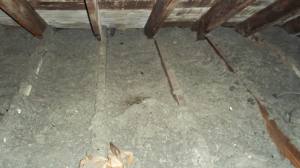 A couple of weeks ago I inspected an older home with a newly remodeled kitchen. When I did my infrared scan of the home I knew what I was going to find when I went into the attic. There was no insulation over the kitchen. The contractor had pulled it out of the area to install new light fixtures and add more outlets in the kitchen.

On a more personal and embarrassing note, I had done some minor work in our attic over one of our bedrooms. That next winter I noticed the room was much cooler than the other bedrooms. I looked in the attic and found that I had forgotten to repair a four square foot area of the insulation when I was done with my work.

If I had to put a percentage number to it, I would have to say that at a minimum, 75% of attics I inspect have damaged insulation. The issue ranges from major damage to as minor as someone forgot to put the insulation back over the ceiling access panel. To whatever degree the insulation is damaged in your attic, it does make a difference in the comfort of the home and the cost of heating it.

Just because the temperature throughout your home is relatively even doesn’t  that you don’t have damaged insulation, it all might all be damaged equally throughout.

A couple of summers ago I inspected a home for my daughter Rondi and son-in-law, Mark. When the weather got cold I got a text message from my daughter saying that her house was freezing and she wanted to know why. I text back, “Read your inspection report”. The home only had about three inches of insulation in the attic. I had told her this when I had done the inspection and clearly stated in the report that the home needed more attic insulation. Of course, me being her dad, she didn’t pay attention to what I told her and they hadn’t read the report. Being a loving and caring dad, I helped Mark, insulated the attic up to the standard of a R-38.

If you haven’t got my point yet…ATTIC INSULATION MATTERS! If someone goes into your attic, make sure they agree to fix any insulation they damage. If you look in your attic and see that the insulation is damaged or that you don’t have enough insulation, do something about it. If you’re not comfortable going into your attic to fix the insulation or add insulation, hire a professional. Good attic insulation will pay for it’s self fairly quickly, but more importantly, your home will be more comfortable, you’ll spend less money heating it, you’ll be using less energy and you’ll be helping to save the environment.