DRESS YOUR BEST WITH THIS VEST

My shop is organized like a home improvement center. I have a hardware section, a plumbing, an electrical, a tool, an automotive and a woodworking section. I have collected over the years some unusual tools from my father, father-in-law and yard sales. One tool that I value and use more than you would think is an old Kenmore sewing machine. 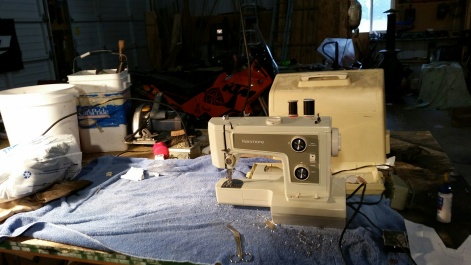 That’s right, I drive a Kenmore. I like the old Kenmore, because unlike most new machines, it has metal gears, not plastic and even though it’s probably not designed to sew through heavy duty material, it will.

Mostly, I use my Kenmore to make motorcycle bags, pouches and repair my motorcycle gear, but on occasion, I get a wild hair and make or tailor clothing. That’s right, I can sew. I’m self-taught, not very good and I don’t care that I’m not very good.

Some people would probably consider me to be creative. If you read the rest of my blog you may also draw that conclusion. Maybe not. I find life more exciting and interesting if I do most of my thinking outside the box. Some of my ideas are original and some are just an improvement on something I’ve seen. As in the case of this project, sometimes I think I see something and it turns out that it’s not what I thought it was at all. But then I think, still, that would be pretty cool, so I make one. That’s how the Biker Sport Coat was born. I was watching a TV show and thought I saw a sleeveless sport coat, but it wasn’t and then I thought, “why not?”

I like shopping at Goodwill or other thrift stores because I know that if I buy something used, then I have just saved the environment a little. I figured the easiest way to make a Biker Sport Coat is to start with a sport coat and cut off the sleeves. This is how I make the first vest. I found a sport coat at Goodwill that fit me and paid the $12.99. I took it out to the shop, cut off the sleeves, trimmed the sleeves with car trunk felt, added some felt on the pocket flaps and the Biker Sport Coat was born. 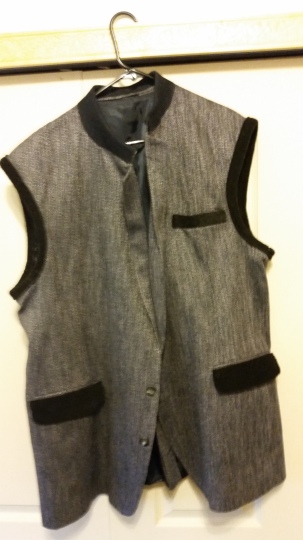 Surprisingly, it turned out okay. I put it on and wore it into the house. My wife, who is my biggest clothes critic, was working in the kitchen. I approached her and asked if she liked my new vest, not telling her that I had just made it. She was amazingly thrilled by it, very complimentary and thought I had bought it. That evening we went out with my two daughters and their spouses and a couple other people. I wore the vest and they liked it too. No one suspected that I had made it.

Last month I was at a franchise convention and I wore my vest. One of the vendors at the convention called me over to his booth and told me how much he liked my vest. When I told him that I had made it from a sport coat he was amazed and asked me if I’d make one for him. I’m not in the business of making vests, but I told him I would and I thought it would give me a chance to add this project to my blog. His is actually the third one I’ve made, first two were for me, and I’ve learned somethings since the first.  First you need a sport coat. Goodwill is a great source and you can buy them from $10-$15. Don’t worry if the sleeves are too short or too long, but it should fit well at the shoulders. Then you’ll need something to trim the vest with. I used trunk liner felt, but after the first one I broke down and bought some regular felt at a fabric store.

The first one I made, I cut the sleeves off, but that made kind of a mess and created some problems when I went to trim them. My advice is to take your time and using a sharp knife or razor, cut the stitching to remove the sleeves.

You should be able to cut the stitching for the liner at the same time. After you have the sleeves removed, remove the shoulder pads and then run a stitch around the arm holes to stitch the shell and lining back together. This will save you some grief when you trim the arm holes. 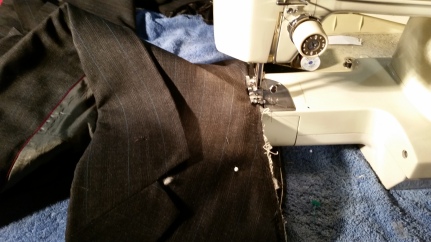 To trim the arm holes you’ll need to measure around the arm holes and so you don’t end up short on material add 2” to the length. Now cut two strips of felt the length you measured +2” and 2” wide. Fold the strips in half the long way and iron them flat. Ironing the trim into a folded 1” strip will make it easier to pin around the arm openings, which is the next step. Start pinning the trim in the arm pit area so that the seam where the two ends of the trim comes together will be hidden under your arms.

Sew the trim on. Remember that you cut the trim 2” long and if by the time you get all the way around the arm hole you have extra trim, cut it off and finish sewing the trim.

To further customize your vest, you can add felt to the pocket flaps, trim the chest pocket with felt and the lapels. On two of the vests I inverted the collar. The underside of the collar was felt, so by inverting it and sewing it in half the opposite direction it gives the vest a Nehru sort of collar and it matches the trim. I also made the lapels half the original width by ironing out the original lapel and folding it in half.

Anyway, for what it’s worth…