So anyway, I think my wife might be insane. Here’s why; every year she plants tomatoes and every year she buys the cheap flimsy tomato cages for the plants to grow on and every year the plants grow up on the cages and tip them over, bending them to the ground. I believe the definition of insanity is -“Insanity: doing the same thing over and over again and expecting different results.” I still love her.

Last year as the tomato plants and tomatoes lay on the ground I told her I would make her tomato cages next year. Hey, I had to do something to stop the insanity. So next year is here and I made her tomato cages.

My youngest daughter and son-in-law have three sons. Myles is the middle son. My mom had three sons. I was the middle child. It’s interesting to watch Myles struggle to find his place in the family. I can relate to the struggle because I also struggled to find my place in my family. As a middle child you really do get ignored, especially if your older brother is cool and your baby brother is cute. His are. Mine were. His mom tries very hard to make Myles feel special, but when his friends come over to play they are drawn to the coolness of his older brother, the cuteness of his baby brother and Myles is mostly left out. Myles is good at passing time playing alone with his toys and is best friend, “imagination.” My mother claims that I did the same.

Myles just had a birthday and for his birthday he wanted tomato plants so he could grow his own tomatoes. He loves tomatoes. When my wife, his Nana, heard this, she decided “we” should make a raised garden and surprise him with the garden and tomato plants. He’s four.

I know it is a little odd a four year old wanting tomato plants for his birthday, but again, I can relate to that oddness. Ask anyone to describe me and they will use many different adjectives and “odd” will always be one of those adjectives. Most people will use restraint and not say it out loud, but the adjective “odd” will be top of mind and on the tip of their tongues. (“Odd”-Deviating from what is ordinary, usual, or expected; strange or peculiar.)

I also routered out a sign that says “Myles’ Garden – Love Nana and Grandpa.” I didn’t have room to say, “Love Nana and Mr. Grandpa Larson,” which is what I insist that all my grand kids call me, so the sign just says Grandpa.

I made the cages out of 3/8” rebar. I figured that 3/8” would be strong , last a long time and the lumber yard was all out of ¼”. Our local lumber yard, Stayton Builders Mart, stock not only rebar, but they also have a rebar cutter. I figured that out of a 20’ piece of rebar I could cut five, 4’ piece out of the bar. Tough math. My plan was to make the cages 4’ tall, with four sides and each side would be 1’ wide, 4’X1’=4′. I bought enough rebar to make six tomato cages. Myles only needed two and my wife needs three, but she told me to make her four because someday she would retire and grow four tomato plants. Clearly she has her retirement activity all planned out, pushing her limit to four plants.

So the Builder’s Mart sold me the rebar, pointed to the cutter and said, “knock yourself out.” The chore of cutting went pretty quickly after I set up a cutting guide. I positioned the cutter 4′ from the base of the lumber rack, slide the rebar end against the rack and cut. Once I had all 45 of the 4′ pieces cut, I took them home, laid them all out in a nice flat row and using water and a wire brush I tried to remove as much rust and crud as I could

I let the bars dry and then painted them red. My wife wanted them painted red so that it would look like we had tomatoes before the tomatoes actually tuned red. What can I say, she is, after all, insane. 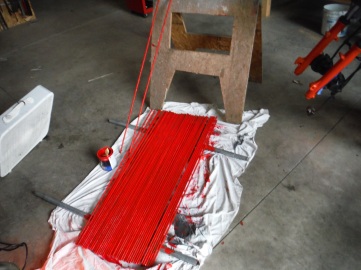 After the paint dried I marked twenty four of the bright red 4′ bars into 12″ increments. Then I clamped each bar in my bench vice and bent them into 1′ squares using a piece of pipe that I slipped over the bars for leverage. It wasn’t as much fun as it sounds and welding the squares onto the 4′ legs was even less fun. After several frustrating hours trying to hold the legs and squares together while welding them I got all six cages welded together. After I finished welding each cage, I tested my welds by tossing the completed cage out my shop door onto the gravel driveway. It wasn’t much of a test, but it made me feel better. Of course, after bending and welding the cages I had to touch up the paint. 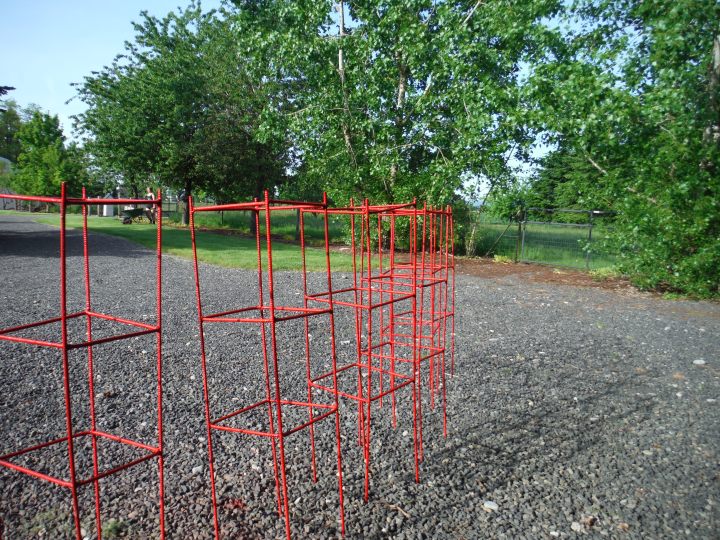 In the end, the cages turned out pretty well. Am I glad I spent all that time making indestructible tomato cages? Yes. Would I do It again? Probably, but I am a glutton for punishment. If you take on this project, get a friend to help you hold the parts together while you weld.