IF THEY CAN BREAK IT, THEY WILL.

Farm animals can be rough on a farm. If you could have a farm and not have farm animals, life would be so much easier. They damage stalls, kick holes through barn walls, tear apart feeders, knock over sprinklers, and destroy fences. On occasion we have made the mistake of not neutering calves. As the bulls grow from cute little calves to 1,200 pound bulls they destroy everything they can get their horns on. We had some twelve-foot tall cedar trees in the field that I had planted and nurtured along for eight years. A bull bent them over and broke them off at the ground. They’re not that smart but they are very strong. We’ve had them decide to take a walk about the neighborhood and push right through the field fencing. The last bull we had knocked one of our donkeys down and was mauling it with its head. That will be the last time any of our calves grow up to be bulls.

Bulls are not the only ones to do damage. Horses lean over fences to get to the grass on the other side, even when the grass they are standing on is better grass. Horses and donkeys also chew on wood and can chew a stall rail completely through in no time. Goats rub against fences, pushing them out and climb on fences, pulling them down. We have solved a lot of animal damage problems by installing an electric fence around the top of our field fence, but it hasn’t eliminated all of the damage.

Three years ago I built some feeders out of plastic barrels.  I cut the barrels in half the long way and used tree poles for the frames and legs. I built them to be “indestructible.” They lasted almost a year. The horse and the donkeys chewed the pole and kicked them apart. The steers and bulls, rubbed their heads and horns against them, tearing them to pieces. I repaired them several times, but in the end the only useable parts were the plastic barrels. So, through this scientific process of elimination I discovered that the only thing the animals couldn’t destroy was the plastic barrels. If you have read any other of my blogs you already know that I am a big fan or plastic barrels.

Now that I knew what the animals couldn’t destroy, I revised my feeder design. I only use plastic barrels, nylon ribbon (used by power line workers to pull heavy wires through long runs of conduit) and large screws to attach the feeders to the stall rails.

To make the new feeders, first thing I did was cut a hole in the side of the barrel, we’ll call the front side, so the animals could comfortably put their head into the barrel to eat the hay. I smoothed the cut edges down so the animals wouldn’t cut themselves when they stuck their heads through the holes. 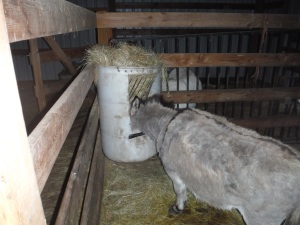 Livestock, especially horses and donkeys, will waste a lot of hay by shoving it around in the feeder, looking for the sweetest stems and leaves. Much of it will end up on the ground, get walked on and polluted. To solve that, most feeders will have a net or slat system that holds the hay up off the bottom of the feeder so the animals have to pull a little out of the net at a time to eat. To install the nylon slats I drilled half-inch holes in a line across the front top of the barrels and across the lower back. Then using the nylon ribbon, I wove it into the feeders from the front top holes to the lower back holes. Any nylon rope or heavy twine will work; just don’t use something edible, like hemp. 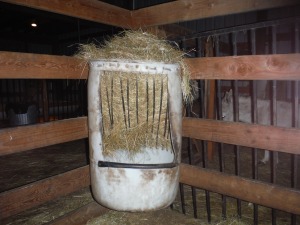 I drilled small holes in the bottom of the barrels so when I cleaned the feeders water would drain out quickly.

The final step was to mount them in the stalls securely so they wouldn’t be torn down. I mounted the barrel feeders in the corner of the stalls using ½” lag screws and washers. Bolts would also work. Of course you have to mount the feeders at the right height, lower for small animals and taller for large animals.

We have used these feeders for two years now without any sign of failure. They have withstood donkeys, a horse and yes, even a bull.

Anyway… for what it’s worth.

Converting a riding mower to an ATV tow behind.

Some friends of ours own some wilderness property next to our property up in the Elkhorn Valley. They don’t spend as much time up there as they use to when their kids were younger, so I take care of their property along with ours. I don’t mind because they let our family use their fire-pit and ¼ acre meadow. That gives us about ½ acre of meadow to expand onto when we need more room.

One of the maintenance items that I like to do a couple times a year is mow the meadows to keep the grass and weeds down. I used my riding lawnmower for a few years, but then our friends gave me an old Craftsmen riding lawnmower keep up at the property so I wouldn’t have to use my nice mower when I needed to mow. The old mower ran pretty well, but the steering gear was going out. I brought it home a couple of times and fix it, but it kept going out.

My oldest son, Justus, has a home on a couple of acres near Estacada Oregon. The property is mostly on the side of a hill and very slopped. His father-in-law gave him a MTD riding lawnmower to mow his pasture. Unfortunately, it didn’t have enough power to mow up the hill that was at one end of the pasture and it tended to want and tip over when driving horizontal to the slope. He called me one day and asked me if I would help him make a mowing deck out the riding lawn mower. His idea was that he would tow the mowing deck with is ATV. I wasn’t sold on the idea of tearing the mower apart and mounting the motor on the deck to run the blades, but I’m always up for a project, so I told him to bring it on over.

After he got the mower here, we scratched our heads and talked about different ideas to accomplish what he wanted. I finally suggest that we remove the back wheels and fender, add a tow bar and just tow it backwards with his ATV. After he could visualized it and I convinced him that the mower would cut backwards as well as forward, he was all for it.

Here is how simple it was. We removed the belt and pulleys that drove the back wheels. We then removed the back wheels, axle and fenders. The steering wheel and seat were not longer needed so they came off too. We locked the front wheel so they wouldn’t move left or right and the mower would tow straight.

Basically, we remove everything that will not be needed and to make the mover as lightweight as possible. When we had it stripped down to the essentials; motor, mower deck, front wheels, gas tank and battery, we bolted on a 4’ long 1-1/2” square bar that would attach to the ATV. Like most ATV, his had a hole in the back towing plate, so we welded a small rod on the tow bar that would drop through the hole. We make the bar long enough that when you turned a sharp corner the back wheel or the ATV wouldn’t hit the mower.

To use mower, you simple hook it up to your ATV, turn the key and start the mower, lower the deck to the desired height and mow away.

After we built his mower, it occurred to me that I could do the same thing with the mower I was using up at the property. The steering was going out anyway, so a tow behind was a great solution. I did the same basic things to Craftsmen as we had done to Justus’s MTD, but my mower didn’t have a good battery, so I cut one end off an old set of jumper cables and attached them to the mowers battery cables. Then when I wanted to use the mower I just hook the jumper cable clamps to the battery on my ATV.

They worked great, but Justus now has a tractor with a mower deck that he attaches to the back and the motor in mine lost all the oil one day and blew up. But it’s all good. It was still a fun project.