One of the best additions I’ve made to my V-strom is the highway or forward pegs. Having the option of stretching my legs forward and resting them on foot pegs is a real relief when I’ve been riding for hours. Making the forward pegs is also one of the more difficult additions I’ve made. In all honesty I have to admit that the project of making the pegs was made difficult by the fact that I am a cheap bastard and instead of buying square metal tubing I used what I had, round pipe. To make the forward pegs for an “Adventure Bike,” I had to make them hinged so that they would fold up and out of the way in rough riding conditions and so they could easily fold back down when riding on the highways. To make them hinge with round pipe I had to heat the ends of the pipe until it was red hot and then hammer the round pipe into perfectly square ends. It gets even more complicated and difficult when one of the… well never mind, let me just tell you how to do this the easy way.

First you have to have a skid plate on your bike. For my V-strom I bought a skid plate. I had all kinds of ideas of how to make a skid plate, but I got such a great deal on the bike that I convinced myself that I could afford to buy the plate. Without a skid plate you might be able to attach to your crash bars, but you’ll have to buy crash bars. The forward pegs are three separate pieces, a long bar that bolts across the front of the skid plate and two shorter bars that are the foot pegs. The two foot pegs attach to the long bar at both ends with a single bolt that acts as your hinge pin. For my bike the long bar is 16” and the foot pegs are 6.5”. I’ve been pretty happy with those lengths, but you may want to make adjustments for your particular bike or riding style.

To make them out of square tubing you would cut the long bar at 16″, but leave a bottom tongue on both ends sticking out about 1″. The pegs are 6.5″ with the bottom corner rounded so it will hinge up and not drag the bottom corner. Cut four 2″ ears out of flat stock and weld them to the ends of the main bar with 1″ of the ears sticking out past the main bar. The ears will be welded to the tongue and main bar, one on each side. The other option is to buy foot pegs and bolt them to the main bar, but what fun would that be? 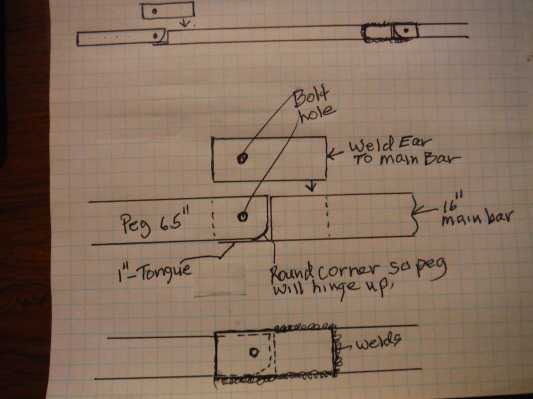 I bolted my long bar to my skid plate with two “U” bolts. To make the foot pegs less slippery and to dress up the pegs I used a pair of rubber handlebar grips and slid them onto the pegs. They worked pretty well, but I failed to glue them on and they had a tendency to slid outward. On a trip to Glacier I lost one outside White Salmon, so I went into a hardware store found a heavy duty black rubber hose that would slide tightly onto the pegs and I’ve use that since. In my shop I found a couple of plastic caps off some kind of aerosal spray cans, probably brake cleaner, to cap the ends of the rubber hose to make the ends of the pegs look a little more finished.

Like I said, one of the best addition I’ve make to my V-strom. I’m not young, have a little arthritis in both knees and being able to stretch out my legs is so nice.