The Making of a Muffler

My grandson refused to learn how to ride his bicycle. When he was two, on his second birthday, he started riding his 49cc ATV by his self, but at six he still hadn’t learned to ride a bike. He clearly had the skill and balance, but he just wouldn’t do it. One day he asked if I would buy him a motorcycle and I told him that he would have to learn to ride a bike before he could learn to ride a motorcycle. So he learned to ride his bike. I looked on craigslist and found a guy that would trade his 1997 Yamaha PW80 for my 1983 Honda XR200. My XR was a nice bike and I went over it, fixing anything I could find wrong with it before I put it up for sale or trade. The guy I bought the PW80 from,Todd, was a nice guy and so I trusted him, but I soon discovered that he wasn’t vigilant with the care and maintenance of his bike, the PW80, and I was foolish enough to believe that, just because he was a nice guy, he had been vigilant. When I got the PW up on my work bench I discovered; the air filter was deteriorated and mostly missing, the chain was caked with hardened oil that I literally had to chip off with a screw driver, the frame was bent and it didn’t have a muffler/silencer.  I’m not convinced that my judgment of Todd wasn’t misplaced, I just believe that he just didn’t have a clue about motorcycle maintenance.

So I went to work and cleaned up the bike and painted it, soaked the chain in oil after I got the solidified oil chipped off and bent the frame straight. I cleaned the carburetor, adjusted the brakes, ordered a filter and did general maintenance on the bike.

Replacing the missing muffler was a little more of a challenge, but a fun challenge. I could have bought a muffler, but that isn’t really my style. Basically, mufflers or silencers attach to the exhaust pipe or fatty and that attaches to the motor. There are three parts to a basic muffler/silencer system; outer metal case and insulation wrapped around a core pipe full of holes. The core pipe that is full of small holes attaches to the exhaust pipe. As the exhaust passes through the perforated pipe, some of the sound escapes out the holes and is muffled in the specially designed insulation that is wrapped around the pipe. The outer metal case holds it all together. Simple. So why are mufflers so expensive? Yeah, they are probably engineered for optimum air-flow so the bike run better or something like that.

The muffler for a PW80 is small, about 11” long and maybe as big around as a 1-1/2” pipe. The after market mufflers are a little larger. I had plenty ¾” pipe that I could make the core pipe out of. and I had some muffler insulation, so all I needed then was a outer case. Sometimes when I need to make something and am not sure what to make it out of I walk around my shop trying to get an idea by looking at stuff I already have. What I found was a 10” tall rattle paint can that was nearly empty. The rattle can had a cool shape at the top and was very shiny when the label is removed. With the can, I had all the basic parts I needed.

I released the pressure out of it, drilled a ¾” hole through the top and bottom and cut the bottom off the can. After I drilled the core pipe full of small holes I wrapped it in the insulation and slipped it all into the rattle can, re-attached the bottom of the can with a pipe clamp by cutting some small slits in the bottom’s walls so it would slip over the body of the can. 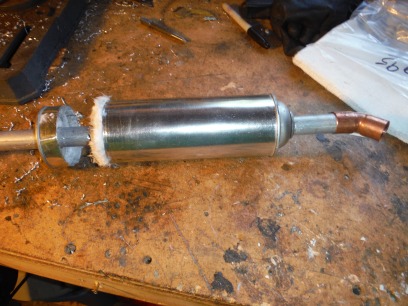 Because the new “after market” muffler was bigger than the original muffler, I used some ¾” copper pipe fittings, soldered together, to attach it to the exhaust pipe and snake it around the frame and into a good location under the back fender.

I hung the new muffler from the frame with some metal plumbers strap and added some metal screws here and there to stabilize it. Without the muffler the two stroke motor sounded like the rapid fire of a gun, pop, pop, pop. Even with a muffler a two stroke motor is loud, but the homemade muffler cut the noise at least in half and in my humble opinion, it looks pretty cool too. 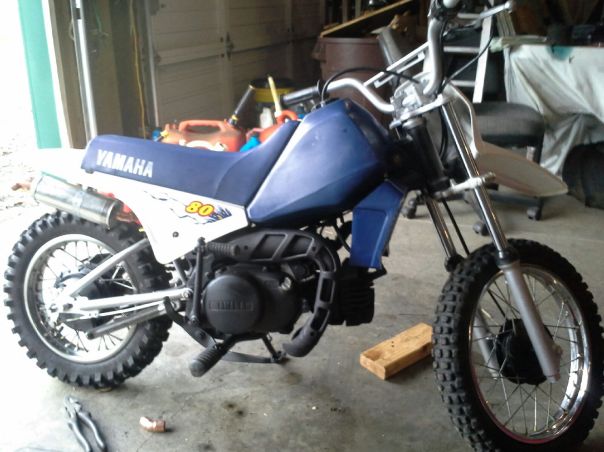