My boys once called me the “Master Rattle Canner.” I do love rattle cans and have painted many things, transforming them from junk to a jewel. The good thing is that the fumes from the paint have not affected my BrA1n N0n3. Over the years my wife, my boys and I have bought hundreds of cans of spray paint for projects we have done. When I moved my stuff from our garage to our new shop we had accumulated over seventy cans of practically used spray paint. To move them to the shop, we put all the cans in two large plastic containers, moved them to the shop and in those two containers they stayed for a year and a half. The problem with having that many cans of paint is that you have to be able to organize them so that you know what you have and so you don’t keep buying more of the same colors over and over again. When I moved into the shop I wanted to organize it so that everything had a place. I put up pegboard, built a bunch of shelves, bought small boxes to organize stuff in, but the two plastic containers of spray paint had me stumped on how to organize them. 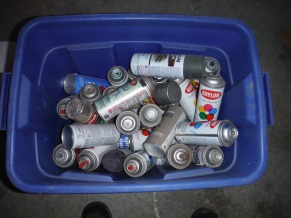 The other day I was shopping at Goodwill, which used to be my favorite store until they raised their prices higher than regular retail, but I still shop there in hopes that I’ll find a bargain. So I was in Goodwill and found a metal rack for displaying wine in a store and I thought, “hey!”  The rack was marked $6.99 and would hold forty bottles of wine/cans of spray paint and with some minor alterations, it would hold sixty cans. 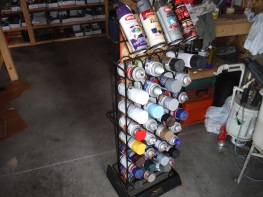 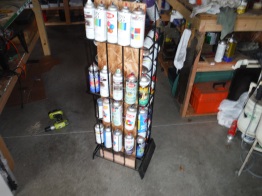 Today I started going through the two containers of spay paint, properly disposing of six cans that were empty and cleaning the heads of the other cans that still had paint, but wouldn’t spray.

Over the years I have learned that when you are done painting something, if you really do turn the can upside down and spray until the spray is clear, the spray head will be cleaned and will work the next time you want to use the can. I now will even go as far as spraying the little spray hole with carb or brake cleaner and wiping it off with a cloth just as an extra precaution. With that said, I don’t always remember to do clear the head and it gets clogged with paint and won’t work. I hate that, having a paint can with paint in it, but won’t spray because the head is plugged with dried paint.

Out of the two containers of spray paint there were about fifteen cans that had paint in them, but would not spray, so I cleaned the heads. This is my method of cleaning a spray can head: I use brake or carb cleaner, a straight pin that is exact size or smaller to insert into the little hole the paint sprays out of, a utility knife, safety glasses and latex gloves.

First remove the head from the can by simply pulling it out of the can and spray a little carb or brake cleaner into the hole in the top of the can where the head was and let that sit while you clean the head. 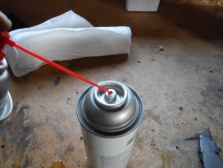 Next, using the utility knife, scrape off any paint that has dried over the little hole. 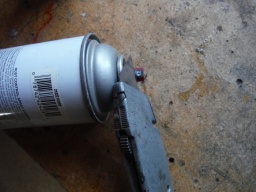 Sometimes that’s all it takes to clean the head, so test the head to see if it is clear by inserting the thin red tube that comes with every can of brake or carb cleaner up the neck of the of the head and being careful to point it away from my face, spray the cleaner into the neck.

CAUTION: You will need to secure the head on the tube by pinching it tightly with your fingers where the tube goes into the neck or you will shoot the head across the room and/or you will get cleaner on your face. 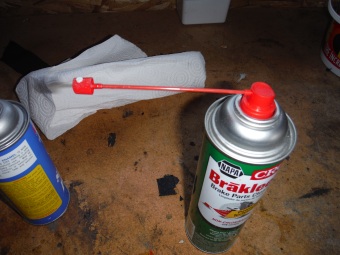 If the cleaner sprays out the head’s small hole, it’s clean. If it’s plugged, take the pin and carefully push it into the small spray hole and up the neck to clear the plug. 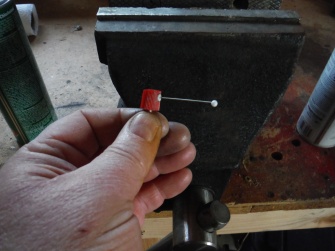 To make sure the head is clear, spray some cleaner in the neck again. Some plugs can be stubborn and you’ll have to repeat the process a couple of times, but this method will unplug the head. When the head is clear, point the head away from you, push it back in the top hole of the can, turn it upside down and check the spray. This cleaning method worked on all but two of the fifteen cans that I had that were clogged. As an extra precaution, I sprayed the head with cleaner and wipe the small hole with a cloth. Next time you want to use the spray paint it will be ready to use.

When you use the can of spray paint up, remove the head, clean it and save it. There have been many times I have dropped a can or knocked it off the bench, losing or breaking the head. Having a few extra heads around will allow you to still use the can of paint until it is empty.

Anyway…, for what it’s worth.