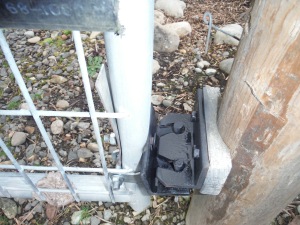 Several years ago I was inspecting outside of a house and opened a gate to the back yard. After I walked through and let go of the gate, it closed by its self and self-centered at the latch post. It kind of surprised me so I had a closer look. What I found was that the bottom hinge had two pivot points. I had never seen anything like it and have never seen it since, but I liked it and was so excited, because I knew it could make my life easier.

Living on a farm, like we do, and having livestock, grandchildren and pets, like we do, there is always the possibility that something or someone will escape the fenced yard or field and end up on the road. Our farm has a perimeter fence all the way around it and the farm is crossed fenced, sectioning off different pastures. All gates open into our yard witch is located in the middle of the property. All gates open to the yard except the one at the long driveway out to the road. So if a donkey or a steer escapes a pasture through a gate that has been left open, or if they learn to unlatch a gate, which they have, the animal will be in the fenced in yard, but if the gate to the driveway is open, they could end up on the road.

Okay, quick quiz; If there are three cowboys in the cab of a pickup truck, which one is the smartest?

Answer; The one in the middle because he never has to get out to open a gate.

The problem with having a gated driveway is that you have to get out, open the gate, drive through, then get out and close the gate. That is way too much work for a lazy man like me. To make things worse, when you live in the Willamette Valley, 70% of the time when you get out to open the gate, you’re going to get rained on. This is why I was so excited to discover the self-closing gravity hinge.

The premise of the gravity hinge is that the two offset pivot points of the bottom hinge will cause the gate to swing up as it swings open. Because it swings up as it opens, gravity will pull the gate closed into a level position. Very cool, I must say.

Showing how the gate swings up at the end when it is open.

The idea is simple, but there were other factors that I needed to consider for our driveway gate;

I’ll address each of these issues one at a time.

Drill holes slightly larger than the rods in the post side plate that will attach to the post then using a cutting torch or a steel cutting blade, cut from the edge to the holes.  (I hope my pictures and descriptions are explanation enough of how the hinge is made and works.)

So this is how it works. You drive right up to the gate and stop. Take your foot off the brake and let the car idle forward against the gate. The gate will push against the far-side arm of the plastic latch until pressure on the gate causes the gate to pops by the arm and swings slowly and fully open. As it swings open, you simply drive slowly through. The trick is to drive at a speed so that you avoid hitting the gate again, causing it to fly open, hit the gate stop and come bouncing back against your car. When done properly the gate will slowly swing open, you’ll drive slowly through and the gate will swing close and latch.

We have found that it is best to open the gate and tie it or latch it to one of the gate stops if we know we have company coming. If we forget to open the gate, most drivers will make the cowboy sitting in the passenger seat get out and hold the gate open while they drive through.

4 thoughts on “The Gravity Hinge”