My son-in-law, Dustin, has been after me to write a blog about my last project. He is an avid reader of my blog and probably my biggest fan. So, this is for you Dustin.

Now that I have moved out of our very cramped garage and into our new shop, I thought it would be fun to do one or two motorcycle projects each year. My first project was a 1985 Honda VF700 Sabre. This bike wasn’t as much of a project as some of my past projects, like the Hawk or the three-wheeler that we converted to a four-wheeler, but I really liked the bike and the price was OK.

When I went to look at the bike I was pleased and surprised with what good mechanical condition it was in. I took it for a short ride and it made me smile. Which isn’t to say much because I’m usually smiling if I’m on a motorcycle, but this little 700cc surprised me. Back in the early 80’s Harley Davidson lobbied president Reagan to tariff any motorcycle imported into the USA that was larger than 700cc. Honda responded with the highly energized 699cc, rounded up to 700. With the 700cc once you get the rpms up into the 6-8K rpms the bike hits a “power band” of sorts and takes off like a big dog. That’s what put the smile on my face that day. Anyway, I bought the bike. At this point I want to put a shout out to my wife who understands my need to have a motorcycle project in the off-season. And I quote her, “I just want you to be happy.”

The bike had been well maintained and the only issue I found was a very small oil leak. A previous owner had laid the bike down and did some minor damage. The highway bar on the right side had been scraped and was worn nearly all the way through. The front blinker lights were damaged and the side panels on each side were missing, along with the right side electrical cover. There was a dent in the left side of the gas tank. The seat cover was worn out, but the seller had purchased a seat cover and threw it in as part of the deal. He also included a repair manual and a full tank of gas.

The first thing I wanted to do is to make sure the bike was street legal, so I started with the lights. The front left blinker light was in pretty bad shape. The orange lens was cracked and bent. I could have bought the lens for about $15 at Honda, but my mind doesn’t work that way. I heated the lens up and reshaped it, then used clear epoxy to fix the crack.

Both front blinker light stems were slightly bent and the globes or bulb domes were damaged. The outer edges of both light domes were damaged and missing sections. One of the great things about living in this day and age is the glues and epoxy that have been developed and can be purchased at any hardware store. Using JB Weld I reformed the missing pieces, making them a little heavier duty than original. Once the JB was dry I reshaped the repairs with my dermal tool and they looked good.

After studying it for a while I realized that I couldn’t make the electrical cover for the right side of the bike and have it match the left side. I wasn’t out to restore the bike, but I felt that matching covers would be important. I was lucky and found a cover on eBay and for $30. it was mine. I also found the other side covers on eBay. They were about $140. each. Being a cheap ba#$%d I decided I could make those. I viewed the panels on eBay and cut a similar pattern out of cardboard. I had inherited some old aluminum road signs from my father-in-law and using the pattern I cut aluminum panels for each side. The flat panels didn’t really fit that well so I bent and twisted them until they formed to the bike.

The original panels where held in place by the seat fitting over the top edge and a clip arm on the back that inserted into a rubber grommeted hole in the fame. I replaced the clip arm with a screw and washer and the rubber grommets with a “clip on nut” that I epoxied in place so it wouldn’t move.

Removing the dent in the gas tank turned out to be challenge in a fiasco sort of way. I thought I might be able to push the dent out if I could get a metal rod into the tank, through the gas fill hole and to the dent. Long story short, I couldn’t. My next attempt, plan B, was to make a slide hammer out of a wood handled screwdriver shaped tool and a plumbing floor flange.

I ground the wood handle flat and hot glued it to the tank. After the glue set, I slid the floor flange with force to the nut and washer at the end of the rod. I did this several times and could see some minor results each time, but not being a patient man, I moved to plan C.

Plan C is the fiasco part of this tank project. The thing is I had done this very same thing before on a different tank with the same results, but for some reason I thought the outcome would be different. Seems like the definition of insane is doing the same thing over and over again and expecting different results. Well I haven’t done this same thing over and over again, yet, just twice. So, just a slow learner? Anyway, I wrapped the nozzle of my compressor air blower with inner tube until it would fit tightly into the gas fill hole. 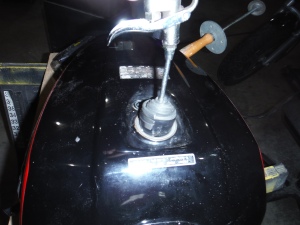 My thought was that if I pressurized the tank the dent would pop right out. Most of the dent did pop out, but so did the bottom of the tank. The bottom of the tank is shaped to fit over the air filter box, frame and other odds and ends. Now it didn’t. It was at that point that I remembered I had done this before several years ago. Damn my memory!

Now I had to reshape the bottom of the tank. I turned the tank upside down on a cushioned chair and started beating on it with a rubber mallet. It was a lot harder to reshape than to unshape, but after several hard whacks I got it reshaped so it would fit back on the bike. I realize that I don’t have to share the stupid stuff I do, but if I can keep readers from making the same mistakes, then this blog will not be in vain. Moving on to plan D, I bondoed what little was left of the dent.

But wait, it gets worse. My brother Nate mentioned that he knew a guy that pressurized a tank and split the seams. With that in mind I tested the tank for leaks and found a leak around the pipe that feeds gas to the tank. My first thought was to use gas tank repair epoxy to stop the leak. I patched it on and let it dry, but my confidence factor was low and tested it again. It leaked. I asked my buddy, Two Stroke, what to do and he said to silver solder it. I rinsed the tank out with water several times, soldered it and it worked.

The next project was to repair the highway bar. As I mentioned earlier, the right side of the bar had been nearly worn through from sliding down the pavement during a “lay-down”. That’s what us bikers call it, a “lay-down.” Lay-down sound more purposeful than, “I crashed my bike.”  Good, no, great bikers have made a mental commitment that they will never crash. They have committed that come hell or high water, they will do everything and anything possible to stay upright. When the situation becomes impossible, the great biker will purposefully lie their bike down is a controlled fashioned.

At this point the bike was pretty stripped down. I removed the handlebars and front fender and prepared everything for paint. If you’ve followed my blogs at all you will know that I love spray-in bed liner. It’s very durable and sticks to just about everything. It also adds a little texture. On this bike I wanted to give it a flat, softer look, so I sprayed everything I was going to paint with the bed liner and used a satin paint. After the bed liner dried, I taped off and primed the parts I wanted green with Rust-oleum 2X Ultra Cover white primer. Then I sprayed on two coats of 2X Ultra satin green and two coats of 2X Ultra clear on everything. I’ve gotten a lot of compliments on the color and if there are those who don’t like the color, they have kept it to themselves.

I installed the new seat cover and that’s it. Except for a little tinkering, the bike is done and ready to sell. It was a fun project and I learned some things.